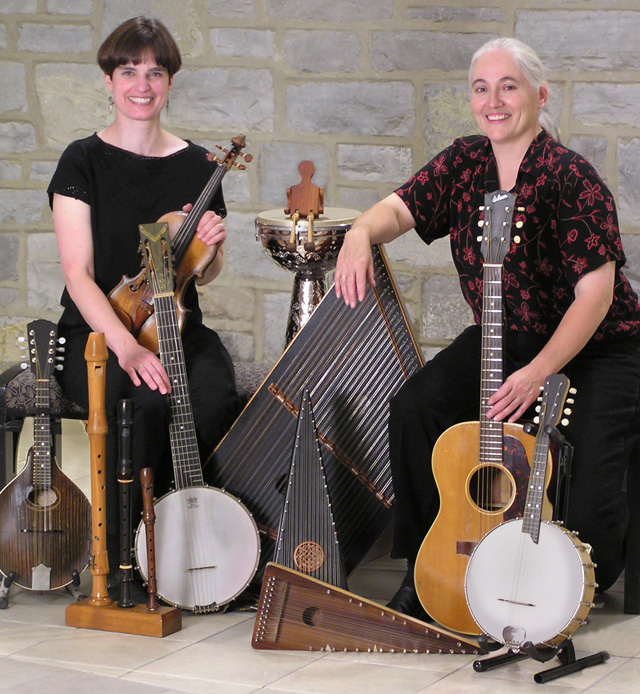 ALL ARE WELCOME TO JOIN US FOR A FREE CONCERT AT ST. PAUL’S IN BREINIGSVILLE

Simple Gifts presents a wide variety of ethnic folk music, including everything from lively Irish jigs and down-home American reels to hard-driving Klezmer freilachs, haunting Gypsy melodies, and exotic Balkan dance tunes. Throughout their performances, they put their own distinctive stamp on traditional tunes, blending styles from diverse cultures with their American roots.

This concert is FREE. However that night we will be collecting donations of non-perishable food items for local food pantries. Donation of these items would be greatly appreciated.

According to the Celtic Classic Festival in Bethlehem, PA, “few musicians can match the warmly personal stage presence Simple Gifts possesses.” It is obvious that these women love the music they play, and they know how to share their talents, their enthusiasm, and their sense of humor with the audience.

Linda Littleton and Karen Hirshon have performed as Simple Gifts since 1995. The group was founded by Littleton in 1989 and has performed throughout the mid-Atlantic region, including appearances at the Smithsonian, Brooklyn Museum of Art, National Governors’ Convention, Longwood Gardens, National Theater, Whitaker Center, Hershey Theatre, Philadelphia Folk Festival, Philadelphia Museum of Art, Ontario Center for Performing Arts, and dozens of colleges and universities throughout the region. Simple Gifts has opened for Natalie MacMaster, Tom Paxton, John McCutcheon, Robin and Linda Williams, Jay Unger and Molly Mason, and Boys of the Lough.

“These women share a chemistry that infuses their music with energy, integrity, and joy. Theirs is a special gift.” –David W. Johnson, Boston Globe

“Listening to [Simple Gifts] is like sampling an international buffet … The number of instruments they pick up in a typical concert makes the group anything but simple. … [This is] acoustic music of the highest order.” –Will Lebzelter, Centre Daily Times

“Simple Gifts wowed our audience with a cultural and educational program that was fun, informative, and energetic.” –Teresia Bush, Smithsonian Institution

St. Paul’s is located in Breinigsville at the corner of Weiler’s Road and Hamilton Boulevard – just outside Trexlertown.

St. Paul’s is located in Breinigsville at the corner of Weiler’s Road and Hamilton Boulevard – just outside Trexlertown. Below are driving directions to the church.

From Allentown and points East
Take Rt. 222 South towards Reading.  After passing the Rt. 78 interchange, you will automatically be routed onto the new bypass (still Rt. 222).  You will pass exits for Krock’s Road, Mill Creek Road, and Trexlertown/Fogelsville.  After the Trexlertown/Fogelsville exit, take the left-hand exit for Cetronia Road; then take the first right onto Weiler’s Road.  You will travel less than one mile, and St. Paul’s will be on the right.

From Kutztown and points West
Take Rt. 222 North towards Allentown.  When the road splits – take the right-hand turn towards Trexlertown.  At the next traffic light, turn left onto Weiler’s Road.  St. Paul’s is on the left.

From Macungie and points South
Take Rt. 100 north towards Trexlertown. Take the Weiler’s Road exit, cross Hamilton Boulevard, and St. Paul’s is on the left.